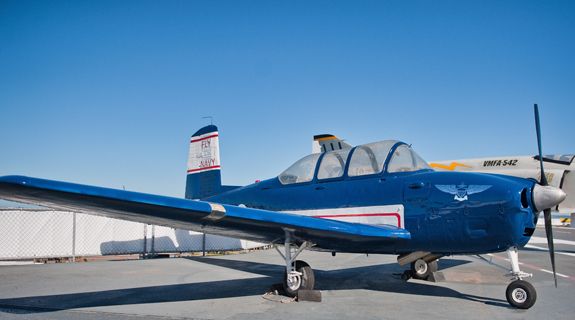 The T-34 Mentor began as a private venture designed by Walter Beach shortly after WWII. Beech felt that there was a market for military trainer based on the Model 35 Bonanza which had been flying for about a year. Beech used the Bonanza as a starting point and began work on the design of the Model 45. The first two prototypes were powered by 205 hp Continental engines while the third had a more powerful 225 horsepower engine. The prototype made its first flight Dec. 2, 1948. The aircraft were then shown to the Air Force which ordered three military test aircraft under the designation YT-34. It wasn’t until late 1952 the Air Force ordered the YT-34 into production under the designation T34. The T-34 spent a quarter of a century in use as a pilot trainer. The first 350 aircraft were delivered to the Air Force in 1953 with the Navy receiving its first of 423 aircraft in 1954. The T-34 design was rugged and reliable and best of all it was all metal construction. Many trainers as late as WWII were not. The T-34 also had many parts in common with different models of the Beech Bonanza and Debonair. Replacement parts were readily available and kept costs down. Both the Air Force and the Navy found it to be an excellent aircraft. Particularly for the intermediate phase of training before going to jet aircraft.