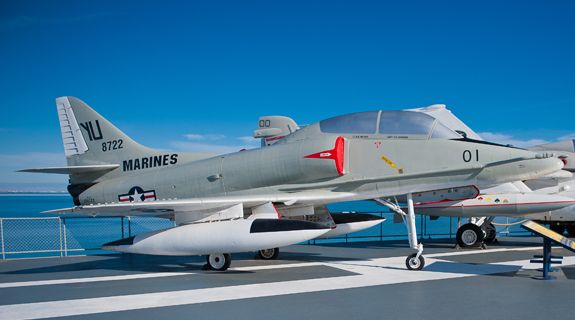 The initial two seat Skyhawk took to the air for the first time on 30 June 1965. Based on an A-4F airframe, the forward fuselage was stretched twenty-eight inches and a second cockpit added by reducing the size of the fuselage fuel tank. Three two-seat versions were produced. The EA-4F was flown by the Electronic Counter Measures “Aggressor” Squadron VAQ-33, electronically simulating enemy missiles for training purposes. The TA-4F Fast Forward Air Control version was fully combat capable; the Ta-4J was intended solely as a trainer in the Advanced Strike Syllabus phase of Navy pilot training.
TA-4J’s were also used as adversary aircraft at the Navy Fighter Weapons School (“TOPGUN”) going up against F-14 Tomcats and F/A-18 Hornets in air “combat.”