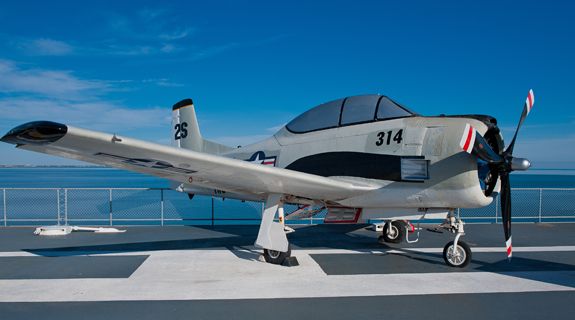 The T-28 was originally designed to replace the T-6 trainer. It was first flown on September 24, 1949, and entered production in 1950. The U.S. Air Force version (T-28A) was powered by an 800 hp. engine, whereas the later U.S. Navy versions (T-28B and –C) were powered by a 1,425 hp. engine. When production ended in 1957, a total of 1,948 of these three versions had been built. In 1962, the Air Force began a program to modify more than 200 T-28As as T-8D “Nomad” tactical fighter-bombers for counter-insurgency warfare in Vietnam. Equipped with the larger 1,425 hp. engines and many other changes, the T-28Ds eventually proved to be an effective close air support weapon against enemy ground forces. The south Vietnamese Air Force (VNAF) used a number of USAF-supplied T-28Bs in a similar role until the –Ds became unavailable.