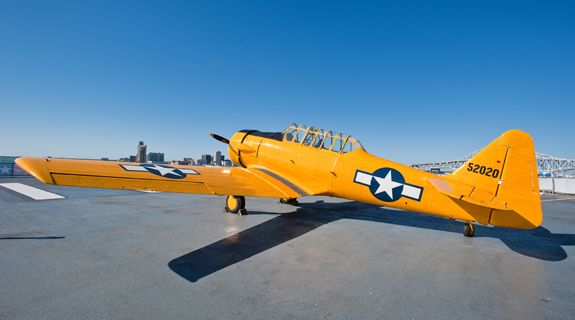 The North American SNJ/T-6, was most commonly known as the Texan or Harvard. It was the US Navy and US Air Force’s advanced trainer from the late 1930’s through the 40’s, and their primary trainer into the 50’s. The success of the Texan can easily be seen in its use by over 60 nations in its many variants right up to the early 1990’s. The use of the SNJ/T-6 was not solely limited to training purposes. During the Korean and Vietnam wars it was used by the United States as a Forward Air Control Aircraft or F.A.C. Along with its ability to be a trainer aircraft, its versatility allowed for ground attack as well. It’s been used all around the world, by nations such as Great Britain, France, Portugal, Spain and Pakistan in low and medium intensity conflicts. It was in actions like these, that The Texan earned a solid reputation for reliability and the capacity to absorb battle damage and still bring its crew back safely. Training pilots and fighting in wars around the world was not the only arenas in which the SNJ/T-6 made a name for itself. Movie producers both in Hollywood and around the world made good use of Texan/Harvard’s amazing ability to adapt to different roles, literally. A prime example is the use of modified SNJ/T-6’s to play the role of Japanese “Zero” fighters in the movies, “Tora!Tora!Tora!” and “The Final Countdown”. The high esteem in which the Texan/Harvard is still held today is illustrated by the fact that at the Annual National Air Races held in Reno, Nevada, there is a separate class just for SNJ/T-6 Texans.