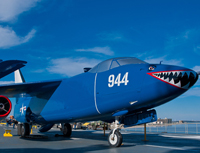 The Skywarrior has a long history, having come from a 1947 Navy requirement for a carrier-based attack aircraft combining jet power with the ability to deliver nuclear weapons. The first prototype flew in October 1952, and the Skywarrior entered Naval service in March 1956. Douglas Aircraft Company produced 280 of the Skywarriors including attack, photo-reconnaissance, electronic counter-measures, training, transport and design for operation from an aircraft carrier. During the 1960’s, the A-3’s role in nuclear deterrence began to fade with the introduction of Polaris fleet ballistic missile submarines. By 1971, the Skywarriors still in service were employed primarily as tankers or in the electronics reconnaissance role in Vietnam. The last A-3 Skywarrior retired from active service with the Navy at Key West, Florida in September of 1991.