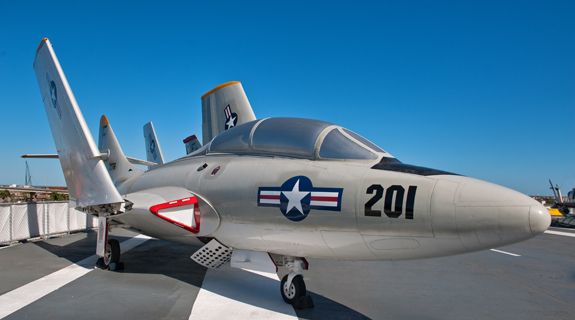 The F9F-6 was the first swept-wing version of the F9F series, taking to the skies in September of 1951. It led to the F9F-8T (a two seat trainer version of the F9F-8) the last in line of the F9F series fighter built for the Navy by Grumman. The F9F-8, first flown in December of 1953, had a large fuel capacity and slightly different wing and canopy than its predecessors. Over 700 of the aircraft were built and they provided the majority of the Navy’s fighters at one point. The last “8T’s” were retired in February 1974. Cougars were also the first swept-wing aircraft used by the Navy’s Blue Angels. They used the F9F from 1955-1957.