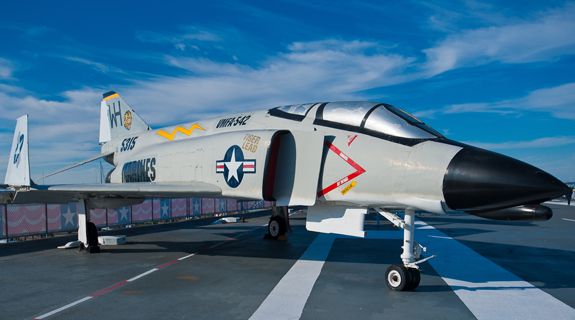 The Phantom II’s unequaled versatility took it to all corners of the globe as a fighter, bomber, interceptor, and photo-reconnaissance plane. Developed by McDonnell in the late 1950’s as a Navy carrier-borne, high altitude interceptor, by the mid-1960’s the Phantom II had been adopted by the U.S. Air Force and Marines for close air support and air superiority missions in the Vietnam Conflict. By the time production finally ended in 1979, 5,057 Phantom II’s had been built in eight major U.S. versions plus numerous versions for export: the British Royal Navy and Air Force, the German Luftwaffe, Australia, Iran, Israel, Egypt, Greece, Turkey, South Korea, and Japan all operated F-4 Phantom II’s.