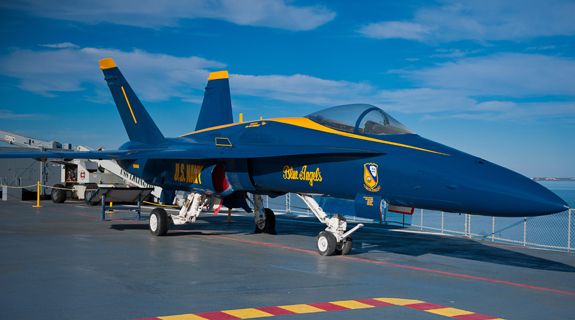 The Hornet proved its value during operation Desert Storm when a pair of VFA-81 sunliners F/A-18Cs, each loaded with four MK 84 2,000 pound bombs, two AIM-9 sidewinders and two AIM-7 sparrow engaged and shot down a pair of MIG-21s while in route to targets in Iraq. The F/A also incorporated self-start capability with a turbine-driven auxiliary power unit (APU), which drives the air turbine starter on the airframe mounted accessory drive (AMAD) and, through a power take-off shaft, cranks the engine. On-board fire extinguishers allow the pilot to put out fires quickly. The wing tanks have foam and there is foam all fuselage voids. There are no fuel tanks between or around the engines and no electrical power is needed to transfer or feed fuel to the engines. Hydraulic fluid for the F/A-18 is non-flammable and it circulates through two completely separated systems, each of which has two independent branches. The system provides for automatic shut down of any failed branch. Fifty percent of the structural weight is aluminum, sixteen percent is steel, thirteen percent is titanium, and although only nine percent of the weight is advanced graphite/epoxy, it covers forty percent of the surface areas. Although it is capable of carrying up to 17,000 pounds of ordnance, the F/A-18A was designed with only one internal weapon, a six barrel 20mm Vulcan cannon. It was located on the center line of the airplane, in the nose, right next to the radar. Firing up to 6,000 rounds per minute. The F/A-18 made its first flight on 18 November 1978 in a test flight and finely joined combat in 1980.