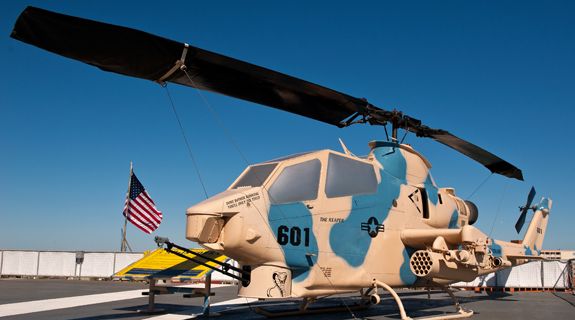 The AH-1 was conceived for the U.S. Army by Bell Helicopter as an efficient, tank-killing, weapons platform. Originally known as the Huey Cobra, the basic design was created in 1965. The AH-1 was developed from the famed UH-1 Huey troop-carrying helicopter, so widely used in Vietnam. Ironically, the Huey Cobra evolved to provide an armed escort for the troop-laden Hueys. The Huey Cobra introduced a novel power turret in the nose. Coupled electronically to the gunner’s helmet, the turret moved as the gunner moved his head aiming the gun just by looking at the target. The first AH-1S models were converted from earlier AH-1G and 1Q aircraft. In this configuration the Huey Cobra could perform standoff hovering and nap-of-the-earth (NOE) missions. On 9 September 1994, this aircraft was donated to the USS LEXINGTON Museum On the Bay by Corpus Christi Army Depot (CCAD) and the Aviation & Troop Support Command (ATCOM) to symbolize the cooperation between the USS LEXINGTON, the city of Corpus Christi, and the Corpus Christi Army Depot. The AH-1 remains an integral part of the Army and Marine Corps aviation arsenal.