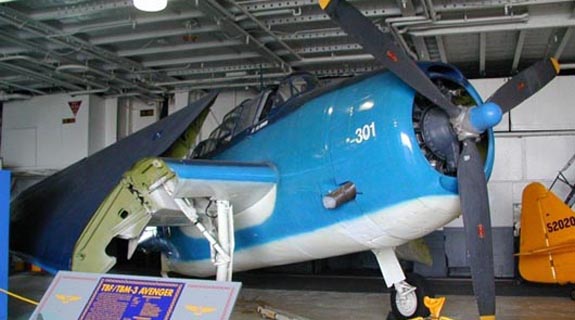 The first Grumman TBF prototype was lost when an in-flight fire forced the test pilot and engineer to abandon it. The second prototype made its first flight on December 15, 1941, and coming so after the attack on Pearl Harbor, was christened the Avenger. The first production TBF-1 rolled off the assembly line on January 3, 1942 and within eight months, all carrier-based torpedo squadrons were re-equipped with Avengers replacing the obsolete Douglas TBD-1 Devastator. The wings were designed to be folded back laterally along the fuselage to alleviate the height problem upward folding wings caused on carrier hangar decks. Avengers became the Navy’s standards and most effective torpedo bomber in World War II. In the mid-Atlantic, they key in hunter-killer group effort against German U-boats. Teamed with dive-bombers in the Pacific, Avengers helped destroy both of the world’s largest battleships, the Musashi in the Battle of Leyte Gulf in October 1944 and the Yamato in the Battle for Okinawa in April 1945.